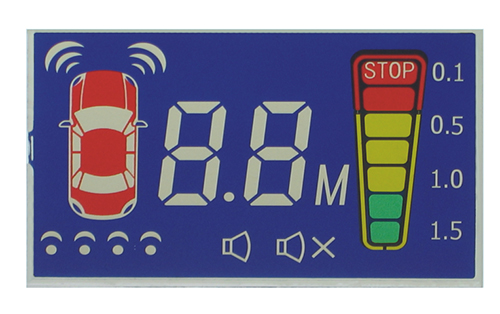 Although Twisted Nematic LCDs may be driven in a time multiplexed fashion to increase the display information, they are restricted in terms of reduced contrast and limited viewing angle. To achieve more highly multiplexed displays, super twist technology is applied.

Super Twisted Nematic LCDs have a twist that is greater than 90° but less than 360°. Currently most STN displays are made with a twist between 180° and 270°. The higher twist angles cause steeper threshold curves which put the on and off voltages closer together. The steeper thresholds allow multiplex rates greater than 32 to be achieved.

In this type of display, the LC material undergoes a greater than 90° twist from plate to plate; typical values range from 180° to 270°. The polarizers in this case are not mounted parallel to the LC at the surface but rather at some angles. The cell, therefore, does not work on a light "guiding" principle, as in Twisted Nematic LCDs, but on a birefringence principle. The position of the polarizers, the cell thickness, and the birefringence of the LC are carefully chosen to result in a particular color in the "off" state. Usually, it is a yellow-green to maximize the contrast ratio. The LC in the cell is "super twisted" that will give it the ability to use a high multiplex rate. As the twist is increased, the LC molecules in the middle of the layer are aligned with the applied electric field by smaller changes in voltage. This gives rise to a very steep transmission vs. voltage curve, allowing up to 240-line multiplexing.

Blaze Display is one of the best stn lcd display glass panel manufacturers and suppliers in China. We are always at your service.